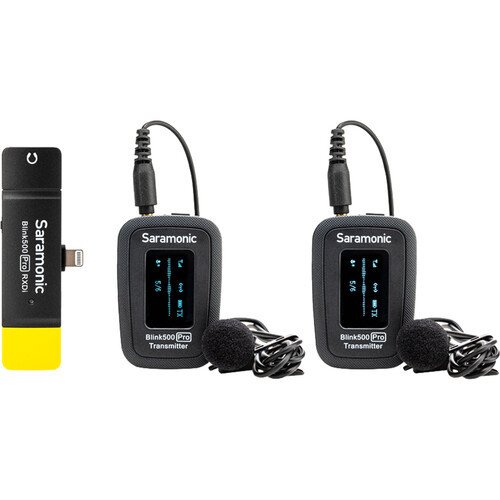 Not only does the Blink 500 Pro B4 deliver considerably improved sound quality compared to the built-in mics on cameras and mobile devices, but it elevates the sound quality of the original Blink 500 with its higher signal-to-noise ratio and more sensitive integrated microphone. Plus, the Pro transmitter now sports a tactile function for immediate mute/unmute operations without having to touch the volume, and the receiver boasts a dedicated headphone output to allow real-time audio monitoring without breaking the connection to your recording device.

The Blink 500 Pro B4 digital system provides out-of-the-box operability for anyone; thanks to quick one-click pairing and the transmitter's internal 8-hour battery, your focus can stay on your content instead of time-consuming configuration. Power each transmitter with its internal battery or through USB for extra-long shoots. Recharging the battery can be done via USB or by simply dropping the transmitters into the supplied fast-charging case. The receiver is bus powered, so it never needs to be charged.

Equally straightforward, small, and versatile, the Blink 500 Pro B4 gives you everything necessary for recording present and clear speech in any location. You get two clip-on transmitters (each with a built-in microphone and a clip-on omni lavalier mic), a dual-channel receiver that plugs directly in your mobile device, charging cables, foam and furry windscreens, and that special charging case. Whether you're a run-and-gun videographer, a YouTube content creator, or an avid vlogger, the Blink 500 Pro B4 can get your wireless audio going pro in no time.

Unpacking the Blink 500 Pro B4