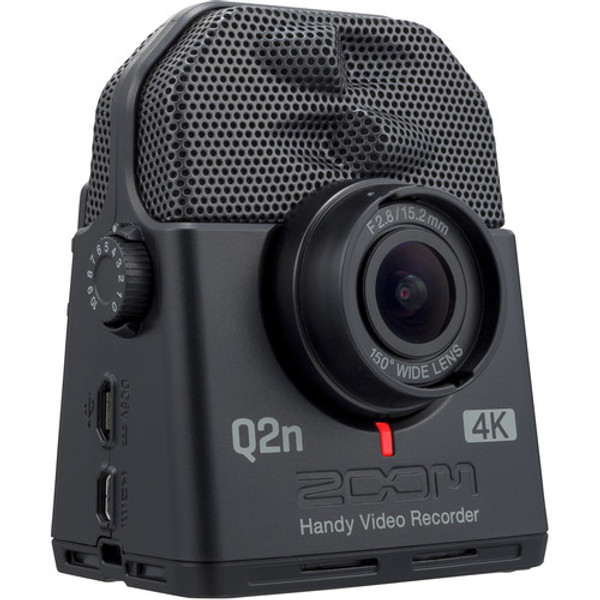 Designed for musicians, the Zoom Q2n-4K Handy Video Recorder pairs high-resolution UHD 4K video capture with up to 24-bit/96 kHz audio recording. Five FOV (field-of-view) settings and one-button recording enable you to easily capture yourself and/or your bandmates, whether for disseminating to your social media accounts or for reviewing a rehearsal or performance.

Its fixed-focus, wide-angle lens has a native 150° FOV and five selectable FOVs for framing wide and close-up shots as you choose. A wide f/2.8 lens aperture produces clear images in dimly lit locations and is augmented by 12 selectable scene modes. Each scene corresponds to a popular performance situation like Concert Light, Jazz Club, Outdoor, Monochrome, and Sepia. An automatic setting chooses the optimal scene mode based on ambient light.

The Q2n-4K's stereo condenser mics are arranged in an X/Y pattern and can handle sound pressure levels up to 120 dB, standing up to even loud rock stages. An audio-only mode records standalone WAV files up to 24-bit/96 kHz. Audio functions include auto gain, a low-cut filter, a 3.5mm line-in/mic-in port, and a headphone output.

A micro-USB port enables you to link the Q2n-4K to your computer or iOS device (may require separately available hardware) for data transfer or for use as a high-quality webcam for streaming over the web using Facebook, YouTube Live, Twitch, or other popular streaming platforms. The HDMI port can be used for viewing your video on a large display monitor.

The Q2n-4K is powered using two AA batteries (included), offering up to 30 minutes of recording time in UHD 4K, one hour in 1080p, or two hours at 720p. Use the bottom 1/4"-20 thread for securing the Q2n-4K to any standard tripod or to mount the separately available BCQ-2n external battery case.

Capture your performances in UHD 4K video at 30 fps or in 1080p60 HD video with HDR technology to automatically expose your subject instead of blown-out stage lighting.

Stereo X/Y mics record high-resolution 24-bit/96 kHz audio and handle up to 120 dB SBL, ensuring clean recordings from almost any source that will hold up through post-production and publishing.

The Q2n-4K features a 150° f/2.8 wide-angle lens, suiting it for recording in a wide variety of lighting environments. A color LCD screen enables you to quickly frame the perfect shot or review your videos.

Use the Q2n-4K's 'Camera Off' setting to capture audio-only demos or live performances in stereo sound using the built-in X/Y mics.

The Q2n-4K features a 3.5mm stereo input jack that lets you connect external mics and other audio devices. A 3.5mm stereo output jack makes it simple to listen to audio with headphones, through your home audio system, or even in your car.

To view your video recording in high definition, you can connect to an HDMI TV using the micro-HDMI type D output. A micro-USB port allows for connection to a computer or iOS device (requires separately available adapter) so you can use the Q2n-4K as a web camera for live streaming, as a USB microphone for podcasts, or as a card reader to transfer recordings (computer connection only).