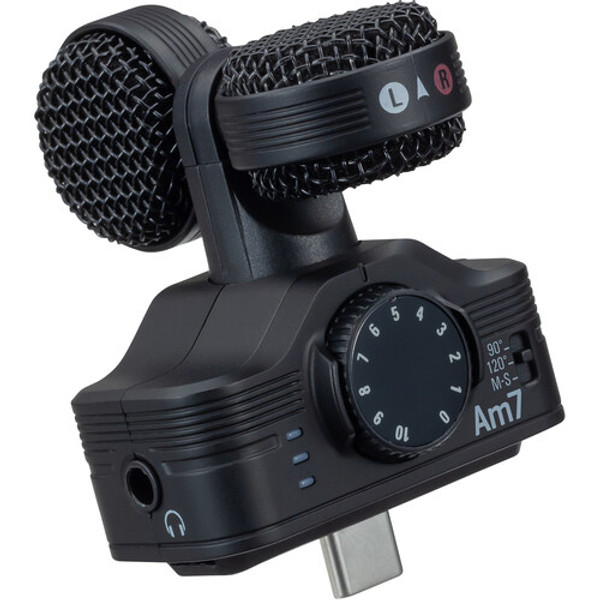 Record high-quality M/S stereo recordings straight to your Android device with the Zoom Am7, a microphone that plugs right into an Android's USB-C jack. With its naturalistic stereo depth of field, the mic is wonderfully suited to music-video recording, video-based podcasts, and more.

M/S stereo is beloved in the pro world, for the technique results in a highly realistic recording, both in terms of width and depth. M/S recordings also "fold down" to mono without issue, and this makes them particularly attractive to people who demand mono-compatibility for their stereo recordings. With the Am7, you can rest assured that your audio will sound equally good whether it's heard on headphones or off a phone's speaker.

The Am7 records audio at broadcast-quality 48 kHz/16-bit, and offers a stereo-width slider to adjust how "wide" you want the resultant recording to feel. The controls are easy to master: a simple gain knob, and the aforementioned stereo-width control. Note the 3.5mm headphone jack as well; this output allows you to monitor audio through headphones while you record, and it can be used as a line out for recording an analog backup recording if desired.

Built with a rotating capsule design, the Am7 mic can align with your camera to capture audio while recording video, or to better suit an audio-only recording. It can also be used to record audio for horizontal or vertical video, delivering perfect left-to-right stereo orientation in the resultant recording. When recording audio without video, simply rotate the mic to the audio position, and point your phone like a mic to the sound you want to record. The Am7 also offers a selfie mode for recording yourself.

The mic is designed to work with Zoom's free Handy Recorder app, which is now available on Google Play to work with this particular model. You'll be able to monitor audio without latency straight from the app. You can also record, mix, and share your audio right from your Android device. The app can automatically upload to SoundCloud for public sharing or Google Drive for sharing among collaborators.

The Am7 mic position can be rotated to align with your camera to capture audio while recording video. When recording only audio, rotate the mic to the audio position, and point your phone like a mic to the sound you want to record. The Am7 can also shoot in selfie mode, allowing you to be in the center of the action.

The mic contains two elements: a directional "mid" mic that captures audio coming from the front, and a bidirectional "side" mic that picks up ambient sounds from the sides. You can set the stereo width to either 90 or 120°, or you can record the mid and side mic signals as raw data and use Zoom's Handy Recorder Android app to adjust the stereo width after the fact. The app also allows you to collapse the signal into phase-coherent mono, ideal for voice recordings such as interviews.

Adjust your input level, with a large front-facing MIC gain knob and LED level meters. Use the headphone jack for monitoring your audio before, during, and after recording.

Available on Google Play, the Zoom Handy Recorder App allows you to record, mix, and share audio from your Android. Upload your creations directly to Soundcloud or Google Drive.