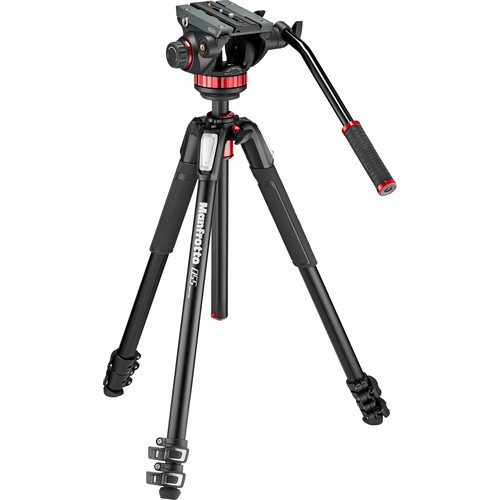 The 502AH features a flat base and 15.5 lb payload, and the tripod offers a max height of 67" with the center column raised. The standard max height is 55".

The Manfrotto 502AH Pro Video Head with Flat Base is an affordable yet remarkably fully featured professional head that represents an advance over the popular 501HDV, with sturdier construction and featuring Manfrotto's patented bridging technology (inherited from the 509 and 504 heads). This head is designed for executing cinematic moves with compact camcorders and DSLR video cameras. The 502AH comes in two versions—the "AH" flat-base version such as this, and the "A" ball base version which is separately available.

The weight capacity is 15.4 lb and counterbalance supports 8.8 lb. The balance plate's 3.27" range allows you to correct for uneven payloads due to matte boxes or DSLR rig configurations.

The bridging technology ensures that the pan friction control is intuitive and easy to set, but also protected against knocks. There are independent locks for pan and tilt, and drag for both is selectable in a continuous range from zero to the max level. This allows you to operate the head in a confident, smooth manner using the included pan bar.

The Manfrotto MT055XPRO3 Aluminum Tripod is a three-section support that replaces the 055XPROB tripod. It has a load capacity of 19.8 lb and extends from 3.5" to 66.9". Its legs are secured by the Quick Power Locks. These updated flip locks increase the tripod's rigidity by 50%, and its load capacity by 4.4 lb over its predecessor.

A redesigned center column has a "one finger" operation, and includes an Easy Link attachment for attaching accessories such as an LED light or a reflector. The center column can be positioned horizontally, allowing for low-angle and macro photography. The upper disc where a tripod head is mounted has been redesigned as well, and now has a bull's eye bubble level that rotates 360° so you can locate it where you can see it. This allows you to level your camera on both the horizontal and vertical planes.