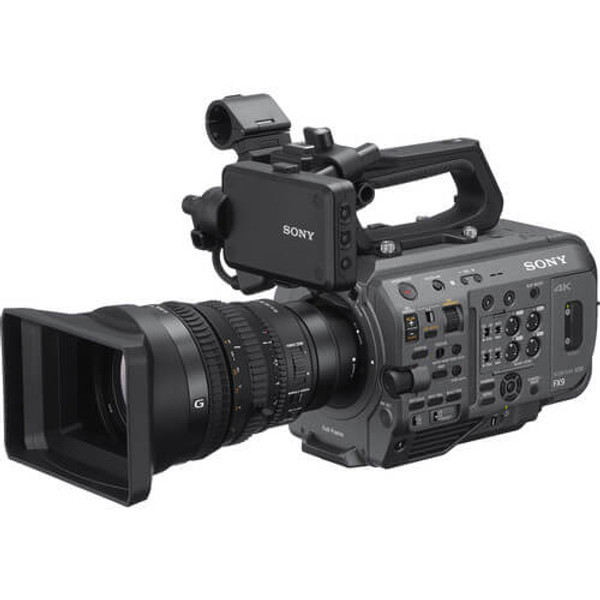 Whether you're shooting documentaries, events, reality TV, education, or corporate productions, the PXW-FX9K XDCAM 6K Full-Frame Camera System from Sony has you covered with its powerful and flexible 4K interchangeable lens camera system. The PXW-FX9K features a full-frame, oversampled 6K Exmor R CMOS sensor that allows you to capture 4K images with cinematic depth of field. The camera's E-mount is machined from stainless steel and allows you to use E-mount lenses. A Sony 28-135mm f/4 G OSS E-mount zoom lens is included, which covers full-frame format and features an f/4 to f/22 aperture range.

The PXW-FX9K input and output features include 12G-SDI and HDMI outputs for 4K, a 3G-SDI output for HD, and genlock and timecode when using a multicamera setup. The Fast Hybrid AF autofocus system allows for accurate focus and even allows facial detection to automatically detect human form with 561 points of detection. Advanced image stabilization is achieved using the PXW-FX9K's internal gyroscope for shots so smooth it'll look like you used a gimbal. Its 4-channel audio recording allows you to use external microphones and record ambient sound with the internal mics simultaneously.

The camera features a 15-stop dynamic range and records 10-bit 4:2:2 to dual XQD media card slots that support simultaneous and relay recording, as well as multiple backup recording modes that utilize proxy files. The camera can record UHD (3840 x 2160) and HD (1920 x 1080) internally at a selectable frame rate from 1 fps up to 60 fps in XAVC-I, XAVC-Long, and MPEG HD formats. And with a future firmware update, it will be able to record HD at up to 180 fps and output 16-bit raw 4K/2K footage up to 120 fps. In addition to its wide dynamic range, its enhanced color and light features include a dual base ISO of 800/4000, which is helpful when in low-light situations or using a slower lens. Its 7-stop electronic variable HD filter can perform in auto or manual mode, smoothly adjusting from 1/4 to 1/128 density. The camera's default S-Cinetone color look offers the same soft, vivid tone as with Sony's VENICE camera.

The FX9 features a base sensitivity of ISO 800, providing the optimal dynamic range for typical documentary applications such as shooting outside or in brightly lit interiors. A secondary high base sensitivity of ISO 4000 excels in low-light conditions such as early morning and evening shoots while maintaining superb image quality. ISO 4000 is also ideal whenever you're using slow lenses.