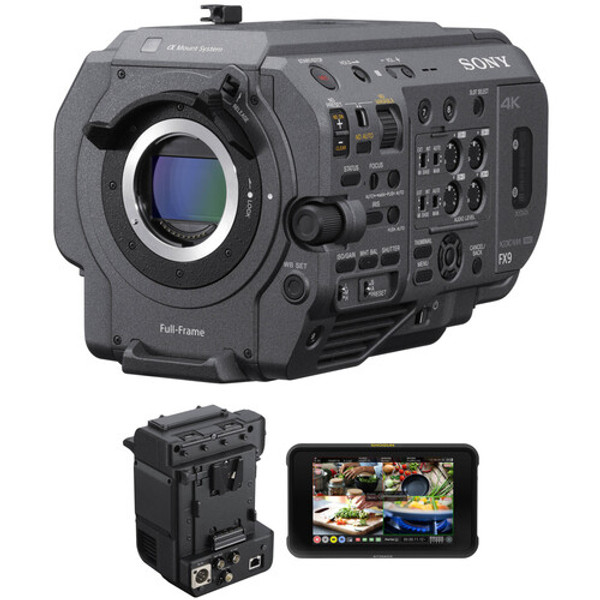 The PXW-FX9 offers a variety of professional features such as a 6K Exmor R CMOS sensor, recording and output up to DCI 4K, an E-mount lens mount, 12G-SDI and HDMI outputs, Fast Hybrid AF autofocus, 10-bit 4:2:2 recording to dual XQD media card slots, recording HD at up to 180 fps, and so much more. The XDCA-FX9 Extension Unit offers additional shoulder support, LAN networking features, and XLR power output, as well as reference, raw output, and timecode inputs and outputs. The Atomos Shogun 7 offers a high-resolution HDR 1920 x 1200 display, 12G-SDI inputs and outputs, and DCI 4K recording, and it can also live-switch up to four HD-SDI camera streams and record the program output.

Whether you're shooting documentaries, events, reality TV, education, or corporate productions, the PXW-FX9 XDCAM 6K Full-Frame Camera System from Sony has you covered with its powerful and flexible 4K interchangeable lens camera system. The PXW-FX9 features a full-frame, oversampled 6K Exmor R CMOS sensor that allows you to capture 4K images with cinematic depth of field. The camera's E-mount is machined from stainless steel and allows you to use E-mount lenses.

The PXW-FX9 input and output features include 12G/6G-SDI and HDMI outputs for 4K video, a 3G-SDI output for HD, and genlock and timecode when using a multicamera setup. The Fast Hybrid AF autofocus system allows for accurate focus and even allows facial detection to automatically detect human form with 561 points of detection. Advanced image stabilization is achieved using the PXW-FX9's internal gyroscope for shots so smooth it'll look like you used a gimbal. Its 4-channel audio recording allows you to use external microphones and record ambient sound with the internal mics simultaneously.

And with the latest firmware update, the camera can record HD at up to 180 fps and output 16-bit raw 4K/2K footage up to 180 fps. In addition to its wide dynamic range, its enhanced color and light features include a dual base ISO of 800/4000 with a maximum ISO up to 102,400, which is helpful when in low-light situations or using a slower lens. Other improvements with the latest firmware include user-created 3D LUTs, improved AF, audio improvements, USB tethering, T-value metadata, password enhancements, and an S35 2K imager scan mode.

The FX9 features a base sensitivity of ISO 800, providing the optimal dynamic range for typical documentary applications such as shooting outside or in brightly lit interiors. A secondary high base sensitivity of ISO 4000 excels in low-light conditions such as early morning and evening shoots while maintaining superb image quality and whenever you're using slow lenses. The FX9's extended ISO range is 320 to 102,400.

Use with the FX9 with Sony's XDCAM air service for camera control, to stream to the Sony Cloud, and to upload proxy footage from the field, saving valuable post-production time. A GPS function both records location information in video clips and displays it via XDCAM air.

Add the XDCA-FX9 Extension Unit from Sony to the back of your PXW-FX9 camera to add an ENG-style shoulder mount and additional I/O and power to your camera. The unit features a 4-pin XLR DC power output to power accessories and other equipment, as well as three BNC outputs for raw video, a reference signal, and timecode. A LAN interface and two USB ports provide live streaming and file transfer abilities, as well as compatibility with XDCAM Air streaming playback.

Monitor, record, and switch in the field with the 7", 1920 x 1200 Shogun 7 HDR Pro from Atomos. This versatile on-camera recording monitor offers up to DCI 4K raw recording, HDMI and 12/6/3G-SDI inputs/outputs. With the AtomOS 10.4 firmware update, the Shogun 7 provides ISO recording of up to four HD-SDI camera streams plus program capture. Output your content for director or client viewing in Dolby Vision HDR using the Shogun 7, AtomOS10 platform, and a compatible display.

This touchscreen monitor supports resolutions up to DCI 4K (4096 x 2160) at 60p and up to 2K at 240p for slow-motion effects. Record to 2.5" SSDs using Apple ProRes Raw, ProRes, CinemaDMG (up to 30p), and Avid DNxHD codecs. Record all your event's action with live multicamera monitoring, recording, and switching between program and up to four 1080p60 SDI ISO camera streams. When used with Final Cut Pro, a fully configurable, multicam .xml can be generated for easier editing.

Save editing time by tagging your footage on-the-fly and recording directly to Final Cut Pro x, Adobe Premiere, or Avid Media Composer formats (third-party plug-ins may be required for tagging).