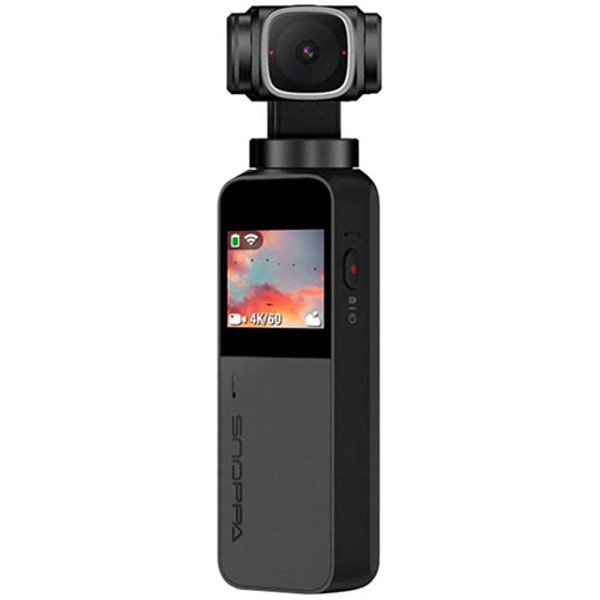 The Snoppa Vmate Micro 3-Axis Gimbal Camera is an all-in-one UHD 4K camera, gimbal, smartphone holder, and Wi-Fi-enabled handheld camera system featuring 3-axis pan, tilt, and roll compensation. The integrated camera captures up to 4K at up to 60 fps, and HD at up to 240 fps in either horizontal or vertical orientation, without needing to enter a menu setting, reboot the system or suffer a loss of resolution. It features a built-in Wi-Fi module that allows you to connect with your smartphone via the downloadable app.

The gimbal features two built-in microphones for recording live sound. However, you can also record audio via your smartphone's mic or an optional Bluetooth mic, and the Vmate automatically syncs the audio to the video footage. You can even capture from your Vmate and smartphone simultaneously, which makes this well suited for vloggers who want to share what they are seeing. Selectable shooting modes include Smart Object Tracking, Face Tracking, Motion Time-Lapse, and Night Shot. The camera records to an optional memory card, and it has an integrated battery that can provide up to 3.5 hours of runtime. An included hard case protects your Vmate and also functions as a clamp that allows you to mount it on your smartphone, up to 3.3" wide.

The Vmate's Broadcaster mode allows you to use the front-facing camera on your smartphone, plus the Vmate's gimbal camera so you can simultaneously record video of yourself at the same time you capture the environment around you

The Vmate features a built-in Wi-Fi module for connecting to your phone, tablet, or other devices using the dedicated Vmate app

A unique audio switching system lets you use one of Vmate's two built-in microphones, your smartphone mic, or allows you to connect to your Bluetooth mic while instantly syncing the audio to your video clips for worry-free capture

A hard case protects your Snoppa Vmate while traveling, and it also doubles as a phone clamp, supporting phones from 2.4 to 3.3" wide