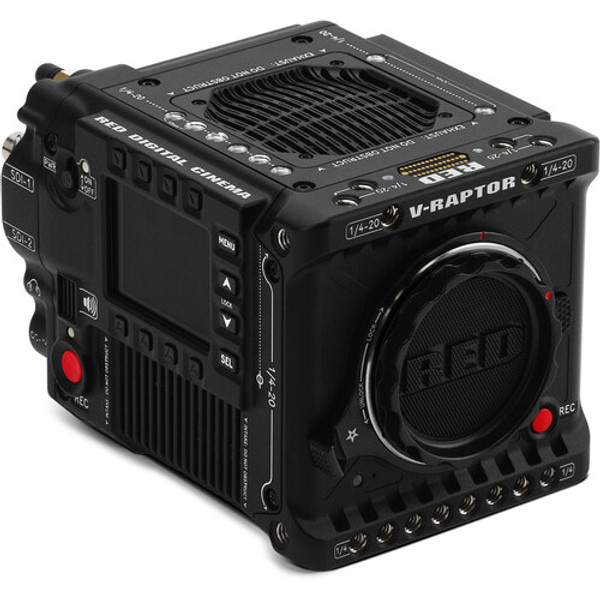 Compact, fast, and full-frame—the V-RAPTOR 8K VV + 6K S35 Dual-Format Camera is RED DIGITAL CINEMA's impressive introduction to their new DSMC3 platform. Sized only slightly larger than the KOMODO but boasting a new sensor, the V-RAPTOR offers multi-format capture in 8K VistaVision, 6K Super35, 4K, 3K Super16, and anamorphic options. This versatility enables you to adapt your format from project to project to suit your choice of a variety of pro cine or still photo lenses. To help get you out the door and shooting, in addition to the black V-RAPTOR camera, this cost-saving starter pack includes a power adapter, one 660GB CFexpress 2.0 Type-B card, one CFexpress card reader, a DSMC3 RED Touch 7.0" onboard LCD monitor, a 3' EXT to timecode cable, one dual V-mount battery charger, two REDVOLT MICRO-V batteries, and two V-RAPTOR Wing handgrips.

The V-RAPTOR's RF lens mount can be used with numerous lens adapters, and it has a locking ring that provides additional security for use with heavier lenses and steady, wide-open capture. In response to user feedback, RED has added a right-side user interface that brings control to 1st and 2nd ACs right at the camera. Dual 12G-SDI outputs, resolutions including 16-bit REDCODE Raw at significantly higher frame rates, 1080 streaming, 17+ stops of dynamic range, and phase-detection autofocus (PDAF) further boost the V-RAPTOR's suitability for a range of production styles.

Note: The integrated 2.4" LCD monitor is for camera control only (no preview video).

The new 35.4MP full-frame sensor at the heart of the V-RAPTOR provides 17+ stops of dynamic range that enable it to excel at low-light capture while offering the lowest noise floor of the RED lineup. And while the V-RAPTOR does not employ a global shutter, its rolling shutter with high-speed readout is almost twice as fast as that of the MONSTRO, all but eliminating motion artifacts. This new sensor also enables phase-detection autofocus (PDAF), a boon for single operators grabbing fast-paced or unpredictable action. To accompany the new sensor, a new fixed OLPF (optical low-pass filter) will enable you to capture RED's signature color quality and sensitivity.

In keeping with the V-RAPTOR's smaller footprint, power is obtained using RED and Core SWX-developed Micro-V mount batteries or RED-approved batteries from Anton Bauer, bebob, FXlion, Hawk-Woods, IDX, and SWIT. Measuring less than 3" wide, the 98Wh RED Micro-V batteries will power the camera for about one hour, with one battery charging in about 2.5 hours and two in 4 hours on the dual charger. Full-size V-mount and Gold-mount adapters will be available as well for users who already have a supply of those batteries or want longer runtimes.

Capture to CFexpress 2.0 Type B cards will enable V-RAPTOR users to avail themselves of more widely available media, although currently, only the RED/Angelbird 660GB card is RED approved. This 660GB card will soon be joined by a 1.3TB card version.

A right-side LCD screen user interface offers on-camera control to 1st and 2nd ACs or an operator positioned at that side of the camera. Physical buttons eliminate accidental selections that can occur with touchscreens, and the ability to save user pages lets you customize the interface to your liking. The interface also helpfully only displays the resolutions and frame rates available with your chosen format.

Dual 12G-SDI ports enable you to output mirror feeds to two displays, or individual feeds with or without focus peaking, timecode, or other displays, or with two different looks. A USB Type-C port outputs up to 1080p video for streaming or other uses.

REDCODE Raw options have been simplified with HQ, MQ, and LQ selections equaling the more popular choices available in RED DSMC2 cameras. Because the 8K sensor captures such massive detail, RED recommends trying MQ or even LQ for most uses, with HQ being ideal for F/X work. Data rates range from 180 MB/s in LQ to 360 MB/s in HQ, so you can plan your media needs accordingly.

The DSMC3 form features several improvements over DSMC2 but offers only limited compatibility with DSMC2 accessories. For example, the KOMODO Outrigger handle is compatible, but POGO-connector compatibility is limited to the new V-RAPTOR version components. One update is a larger fan system with two intake valves that provide better thermal heat exchange (TEC), enabling a wide ambient temperature operating range.