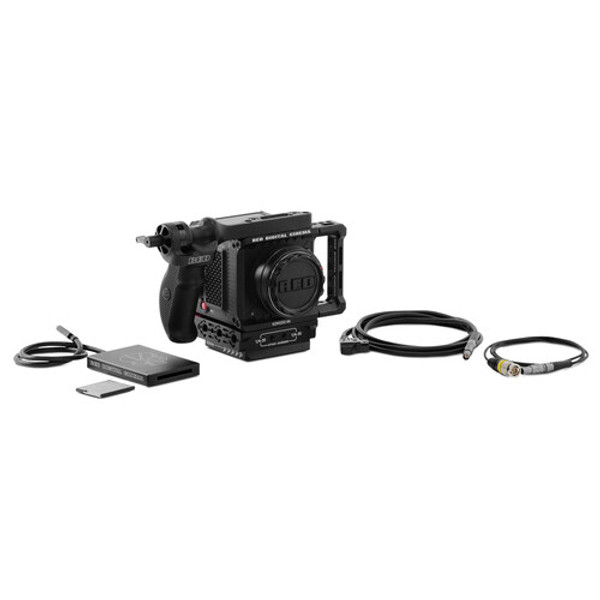 Note: Electronic control of Canon RF lenses is not supported at this time.

RED's versatile REDCODE RAW compression reduces data rates while maintaining visually lossless image rendering. The KOMODO 6K captures REDCODE RAW at rates up to 6K40 and 4K60. The efficient, time-saving REDCODE RAW codec can be edited on many available NLE software programs without transcoding. Apple ProRes recording rates extend to 60 fps in 4K in both 422 HQ and 422, and up to 120 fps in 2K for slo-mo shots. The KOMODO 6K features data capture rates up to 280 MB/s on RED PRO CFast cards and qualified third-party CFast 2.0 cards.

Maintain the KOMODO 6K's compact form by powering it with two lightweight Canon BP-9 batteries, or use a larger battery or the included AC power adapter when capturing long events. The KOMODO 6K's RF-style lens mount can be used with mechanical EF adapters and it offers full lens communication when paired with a compatible EF electronic mount. While not compatible with DSMC or DSMC2 accessories, the KOMODO 6K can be paired with separately available components like an Expander Module, an Outrigger Handle, and a CFast 2.0 card reader.

Capture at rates up to 280 MB/s on RED PRO or qualified third-party CFast 2.0 cards

For proxy files or quicker turnaround times than raw files, Apple ProRes can be recorded at 4K and 2K resolutions at rates up to 120 fps (2K)

The KOMODO Outrigger Handle from RED DIGITAL CINEMA provides flexible handling when operating your KOMODO digital cine camera. This low-profile handle is especially suited for keeping one hand on the integrated record/stop button and the other positioned for focus pulls or zooming.

The KOMODO Outrigger handle features include a rugged build, 360° of swivel rotation for optimal positioning, and two 1/4"-20 mounting points.

The EXT-to-Timecode Cable enables you to input timecode to your RED DIGITAL CINEMA KOMODO camera. This cable links to the camera via its 9-pin EXT connector and measures 3' including the connectors.

The D-Tap-to-Power Cable enables you to power your RED DIGITAL CINEMA KOMODO camera from a battery with a D-Tap 7 to 17 VDC output. This cable sports a D-Tap connector on one end and a 2-pin connector on the other, and it measures 6' including the connectors.

The adapter's design extends the ability to use filters with unique lenses that cannot accept filters on the front, and and it also retains full autofocus and image stabilization capabilities of the mounted lens. It is also dust- and water-resistant, making it suitable for use in harsh weather conditions.

Designed for use with the Canon Drop-In Filter Mount Adapter EF-EOS R, this Drop-In Clear Filter A is a simple clear protective filter used to guard the interior of the camera body and rear element of the lens when the lens adapter is in use. It is primarily used when the Drop-In Filter Mount Adapter is in place, but no filter effects are desired.