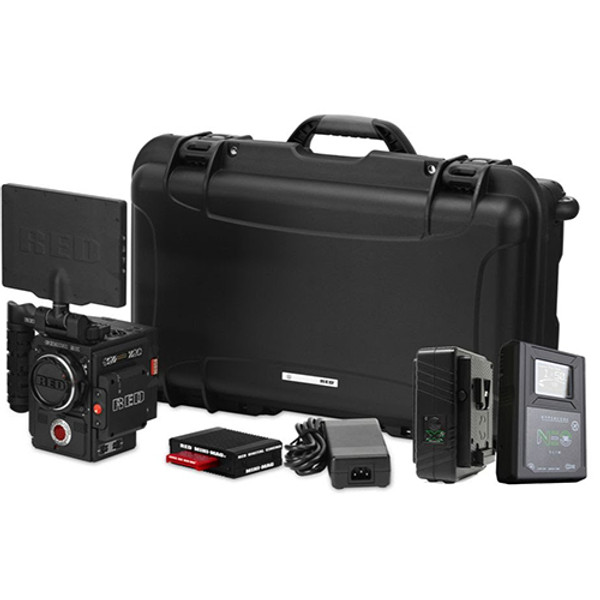 Bundling high-performance raw video recording in a compact camera body, the RED DIGITAL CINEMA DSMC2 BRAIN with GEMINI 5K S35 Sensor is part of the 2018 unified DSMC2 lineup and is designed to be built up the way you want, to tell your story in almost any way possible. Since the DSMC2 form factor is standard, accessories from RED and other manufacturers can be easily attached to accessorize your camera. Even though the GEMINI sensor has fewer photosites than its HELIUM and MONSTRO brethren, it has a cool trick up its sleeve. Using advanced circuitry designed for the aerospace industry, the GEMINI can switch native sensitivities. Practically speaking, it can operate in both normal and dimly lit scenarios without prematurely blown highlights or excessive noise, respectively. Nearly limitless lens options are available for the DSMC2 system. While this camera requires a separately available lens mount, DSMC lens mounts themselves are offered in different varieties for compatibility with a wide array of lens systems.

REDCODE RAW is the format of choice for DSMC2 cameras. RED's versatile raw codec uses wavelet compression to reduce data rates while maintaining a visually lossless image rendering. This efficient codec can be edited on many available NLE software programs without transcoding, though if you prefer a proxy workflow, ProRes or DNx files can be recorded simultaneously to the MINI-MAG media. Lowering the recording resolution allows the sensor to capture higher frame rates for dramatic slow-motion footage. The DSMC2 cameras use sensor windowing to record slow motion in lower resolutions, requiring wider or smaller-format lenses to compensate for the additional crop. Recording rates range from 12 fps and up, including 24/25/30/48/50/60 fps and higher.

The cornerstone of RED's workflow is the robust REDCODE RAW file format. Using wavelet compression with ratios ranging from 2:1 to 22:1, REDCODE RAW offers the versatility of raw files without the overwhelming storage requirements of uncompressed image data. Since REDCODE RAW has been around since the days of the RED ONE cinema camera, many common NLE software programs including Adobe Premiere Pro, Blackmagic Design DaVinci Resolve, Apple Final Cut Pro, and Avid Media Composer can import and edit REDCODE RAW footage without transcoding, saving production time in the edit suite. Capture rates range from 12 fps and up, including 24/25/30/48/50/60 fps and higher options.

Note: Not all compression ratios are available at all resolutions and frame rates

For projects requiring proxy files or quicker turnaround times than raw files permit, Apple ProRes or Avid DNx formats can be recorded at 4K and 2K resolutions directly to the onboard MINI-MAG media. Since these debayered video files can be recorded alongside the raw files, no extra time is required for transcoding the proxies. Bring the debayered files straight into your NLE and begin editing.

Like the preceding DSMC cameras, RED designed the DSMC2 camera line to be modular to fit a wide range of production workflows. Smaller and lighter than the original DSMC design, when stripped down to the BRAIN itself, you have a high-resolution gimbal workhorse. Likewise, add DSMC2 modules to the rear to gain professional I/O connections and battery power. Many other parts of the DSMC2 design are meant to be interchangeable. Swap out the lens mounts to open up new libraries of lenses. Exchange the included standard OLPF (Optical Low-Pass Filter) for alternative image renderings at the sensor level. Mount an EVF without cables that can get snagged, or use a separately available adapter to attach RED LCDs via LEMO cable. Since the DSMC2 form factor is standardized, any accessories that you have for this DSMC2 body will work with any other DSMC2 body, should you upgrade or acquire an additional body in the future.

This aluminum RED Digital Cinema DSMC Canon Mount attaches to your DSMC or DSMC2 camera brain providing an EF/EF-S compatible lens port for your camera. Dual locking rings secure your lens in the mount, minimizing play. The mount features captive screws, so you don't have to worry about accidentally dropping a screw into the sensor cavity.

The mount supports electronic communication between the lens and the camera, although not all functions may be supported. RED DSMC mounts are designed to be swapped without requiring a back-focus adjustment.

Designed for cable-free mounting to select DSMC2 RED cameras, the RED DIGITAL CINEMA Touch 7.0" LCD (Aluminum) features 1920 x 1136 resolution. The design of the LCD provides good off-axis viewing up to 170°, with 85° left, right, up, or down so you don't have to be directly aligned with the viewfinder to see an optimal image. The LCD features multi-touch control, with hard navigation buttons on the side.

With a brightness level of 350 cd/m² and contrast ration of 1000:1 providing a clear image, the RED Touch LCD mounts directly to your camera without any cables needed between the LCD and your camera. It can mount directly onto DSMC2 cameras including the WEAPON 8K S35, WEAPON 6K, EPIC/SCARLET-W, EPIC/SCARLET M-X, EPIC/SCARLET DRAGON, and the RED RAVEN. A built-in mirror and image flip allow for monitoring while upside down for special applications.

More than just a way to power your camera, the RED DSMC2 V-LOCK I/O Expander provides a variety of input/output connections in addition to a V-Lock mount for your DSMC2 camera. The Expander is made from magnesium, so it is lightweight yet strong. It enables powering your camera from a V-Mount battery or by an alternate DC source via cable, and you can set it to automatically boot your camera up once power is connected. It provides both 3G-SDI and HDMI outputs, as well as control and sync outputs.

Built-in USB and auxiliary power outputs enable powering accessories and limiting the number of power splitter and converter boxes hanging from your camera. Audio is not forgotten by RED, and the Expander features both an analog stereo input and a stereo headphone jack. It is compatible with the WEAPON 8K S35, WEAPON 6K, as well as the EPIC/SCARLET-W, and the RAVEN.

The Expander features a physical switch that allows you to enable the camera to automatically boot up when power is applied. This is a useful feature for when the camera is in a difficult-to-access position.

Since the V-Lock I/O Expander communicates with your camera, and allows electronic signals and video output, it requires that your DSMC2 camera has firmware v6.2.17 or later installed.

This RED DIGITAL CINEMA RED MINI-MAG has a capacity of 960GB, is compatible with most RED cameras (may require SSD module), and on select cameras can attain write speeds as high as 300 MB/s. The RED MINI-MAG can support simultaneous R3D and Apple ProRes recording, when used with DSMC2 camera systems.

Designed with the sole purpose of offloading data from your RED MINI-MAG SSD media, the RED STATION RED MINI-MAG supports USB 3.1 protocols and allows you to transfer files to your computer at up to 10 Gbps. Sleek, compact, and durable, the unit takes up little desktop room and its small size provides more possibilities for fitting it into cases. It includes one each of a USB Type-C, and a USB Type-C to Type-A cable.

The DSMC AC Power Adapter Pack from RED DIGITAL CINEMA provides continuous power, enabling you to conserve battery power when using DSMC and DSMC2 cameras. It consists of the 12' DSMC AC Power Adapter 150W and the Mini World Travel Adapter. Please note that the DSMC and DSMC2 camera systems do not have a DC IN power port; a port expander or power module is required to power the camera.

Note: The DSMC AC Power Adapter Pack is not compatible with the RED ONE, RED RANGER, or KOMODO camera system.

The Hypercore NEO 9 Slim, in a V-mount, from Core SWX is a compact 14.8V, 98Wh lithium-ion battery that supports a constant 12A draw and peak draw of 16A. With this high output, the battery is designed for cine and broadcast applications, but, of course, it can be used for virtually all other applications as well. At only 4.7" in height and weighing just 1.4 lb, it's also highly suited for gimbal, drone, and other mobile applications. The Hypercore NEO 9 Silm has the ergonomic design, large backlit LCD, and protective over-molded rubberized housing that Hypercore batteries have come to be known for over their past releases, but this NEO 9 Slim version is a lot more advanced.

It's microprocessor-driven like previous Hypercores, ensuring safety and runtime delivery to camera viewfinders or LCDs, but, leveraging the microprocessor, the NEO 9 Slim features an RFID transmitter on the front that lets you monitor the stored battery data via Core SWX's VoltBridgeID iOS app or an RFID reader. Furthermore, the NEO 9 Slim has a more modular design consisting of less cabling, allowing for increased quality. With the different parts installed separately and securely inside the housing, the chance of failure is reduced in case of drops, and servicing the battery becomes a simpler, more efficient process as the different parts install plug-and-play.

In addition to the large LCD, the Hypercore NEO 9 Slim has an LED gauge on the side where the user can easily glance over at it. Other features include 2000 charge/discharge cycles, hibernation mode, and the ability to communicate to cameras as well as chargers with both one-wire and two-wire protocols (see the Features section below). Such an advanced battery wouldn't be complete without peripheral support. The NEO 9 Slim provides a SmartTap D-Tap port and a USB port for powering/charging devices. The SmartTap port lets you power any 12 VDC accessory and transmit battery data if the accessory is able to communicate that information.

A multipurpose backlit LCD provides nominal runtime based on a 25W load, remaining runtime once connected to a device, and remaining charge time when on a charger.

The Hypercore NEO 9 Slim can communicate to cameras as well as chargers with both one-wire and two-wire protocols.

The packs go to sleep/hibernate when there is no battery usage or movement after a 48-hour period. Once the battery is picked back up, it awakens.

Integrated "smart" D-Tap connector allows users to power any 12 VDC device while also receiving all battery data from the port.

The NEO 9 Slim is firmware-upgradeable via its USB port.

The Hypercore NEO 9 Slim UN38.3 is certified for safer travel (depending on the airline carrier).

Charge your V-mount batteries while traveling with the GPM-X2S Mini Dual Travel Battery Charger from Core SWX. Taking advantage of the same technology built into the larger fleet chargers, this compact travel charger can charge a single battery at a 3A rate or two batteries simultaneously at 1.5A. Since it sits vertically with two batteries mounted, the GPM-X2S takes up less space than traditional chargers.