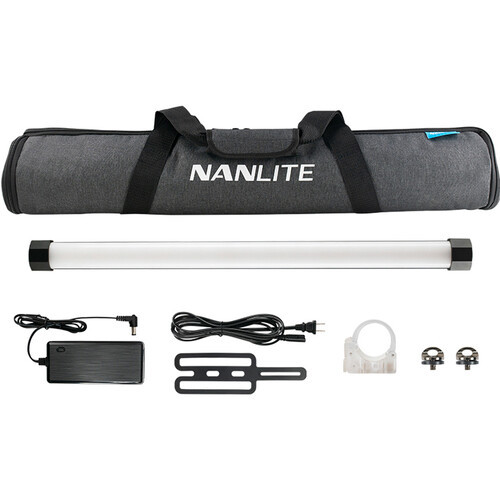 With a length of 2' and T12 compatibility, the PavoTube II RGBWW LED Pixel Tube from Nanlite is ideal for hiding unobtrusively in small areas on a set or for shooting in vehicles such as cars, boats, or planes. The light has 3 1/4"-20 receivers to offer mounting options.

Flexibility is key to the PavoTube's design. The light has color temperature that's variable from 2700 to 12000K to blend in seamlessly with ambient light conditions, match other fixtures, or express creative effects. It also has an RGB mode that enables its red, green, and blue LEDs to select from 360 colors with hue and saturation control that produces myriad color combinations. Light intensity is variable as well, and while you can make adjustments locally on the fixture, you can also do it wirelessly via an optional radio remote control, the Nanlite app or wired via DMX. The PavoTube also has pre-programmed special effects such as cop car, candle/fire, hue pulse, storm, and explosion.

The PavoTube has a built-in rechargeable battery that will give you 96 minutes of run time on a full charge at 100% power. The light is ready for worldwide use via the included multi-voltage AC adapter and comes with a set of mounting clips and a padded carrying bag.