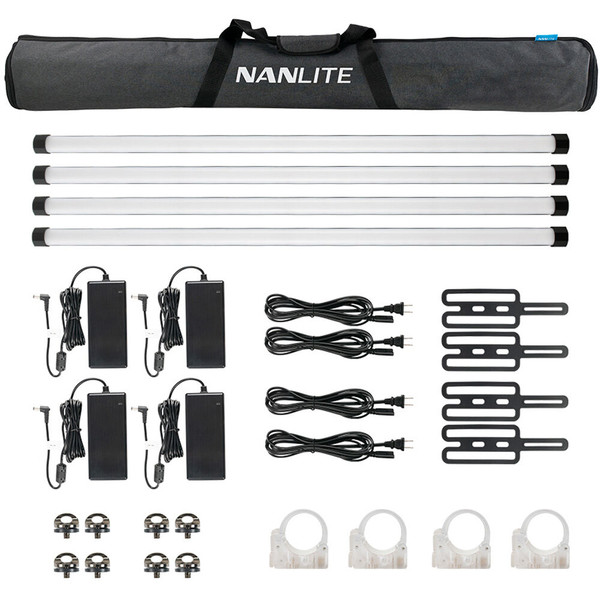 Receive a free LitoLite 5C ($74.99 Value) when you purchase this product

If you're looking for a unique light source with a huge host of features, then look no further than this PavoTube II 30X RGBWW LED Pixel Tube 4-Light Kit with Internal Battery from Nanlite. The kit contains four RGBWW PavoTubes, each measuring 4'. Each light tube comes with a power cord and a carrying bag.

A second-generation LED tube refined based on feedback from creators around the globe. Featuring 0 to 100% dimming, an output of 377 lux @ 3.28' (5600K), an average CRI of 95, an average TLCI of 98, adjustable color temperature from 2700-12000K with green/magenta adjustment. It also has full spectrum RGB, 15 practical special lighting effects, and 10 pixel-based lighting effects

The Nanlite PavoTube II RGBWW LED Pixel Tubes are the next evolution of Nanlite's signature light fixtures. These second-gen LED tubes have been refined based on feedback from creators around the globe with features including DMX compatibility and enhanced app control

Powered by an internal 4400mAh Li-ion battery, the PavoTube II 30X has a runtime of 1 hour and 36 minutes at full brightness while being completely untethered. Full battery recharge is achieved in 2 hours and 40 minutes via the included AC adapter, which can also power the PavoTube II 30X during longer shoots