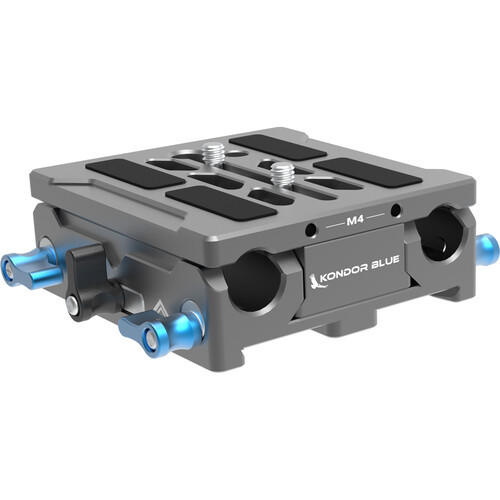 Add 15mm LWS and quick release support to your professional camera rig with this Kondor Blue Universal 15mm LWS Bridge Plate. The bridge plate is designed to work with ARRI-standard dovetail rigs and can support larger pro cameras from ARRI and RED and camera models such as the Blackmagic Design URSA Mini line, Canon EOS C70, and the Sony FX6, Rialto, FS5, F5, and VENICE. It features an ARRI-standard dovetail base, a quick release camera plate, and a 15mm LWS rod system.

The quick release camera plate features 1/4"-20 and 3/8"-16 mounting screws, front M4 screws for a lens support, and rubber padding on top to protect the camera from scratching or twisting. The dovetail base offers 1/4"-20 and 3/8"-16 tripod mount threads. Its 15mm rod ports pass through the entire base and are secured with four locking levers, making it easy to add two sets of optional rods of different lengths through the front and rear. The bridge plate features a standard 3.3" riser height to match the camera's lens height, and optional riser plates will be available to support additional camera models.

Optional camera-specific riser plates will also be available for a variety of additional cameras from ARRI, RED, Canon, and Sony