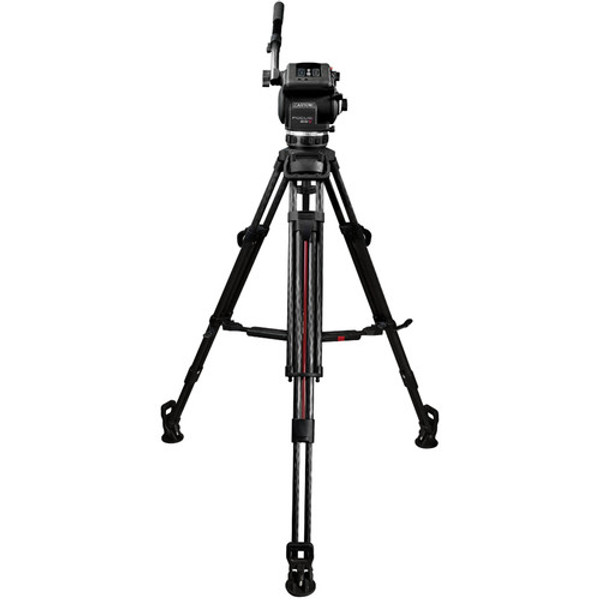 Featuring the 100mm Focus 22 fluid head, this Cartoni Focus 22 Tripod System with 2-Stage Carbon Fiber Legs, Mid-Level Spreader, and Bag is a kit intended for users who shoot with a camera and accessory payload weighing between 6.5 to 48.5 pounds. Despite its load capacity, the system is lightweight and torsionally stable. The Focus 22 head provides smooth tilting along its entire +/-90° range and features continuous counterbalance adjustment.

The kit also includes the L507 2-stage carbon fiber tripod legs, which feature 31 to 64" height adjustment and SmartStop leg locks. The 100mm half ball head fitting creates a large support platform for stable pans and tilts. The included mid-level spreader enables setting up your tripod on uneven terrain or stairs. The tripod features spiked feet that allow for excellent grip on soft surfaces such as dirt or sand, while the included rubber feet protect delicate surfaces and provide grip on hard or slick surfaces. The system packs into the included soft carry bag.

The Cartoni Focus 22 Fluid Head features a 100mm ball base and supports loads between 6.6 to 48.5 lb, with perfect balance along its entire +/-90° tilt range. Relatively lightweight at 8.6 lb, it is intended for users who usually shoot with light loads and therefore need a lightweight head, but who sometimes need to add on a heavy lens or accessory.

The Focus 22 is the largest in a lineup of four video heads that were released as a follow-up to the Cartoni Focus HD head. The complete lineup is an evolution of the original Focus head released in 2005, and a definitive rebranding of 10 years of contribution to the entry- and mid-level user category. Like the others in the lineup, the Focus 22 consists of 127 parts, incorporates a universal plate system, and uses a new composite material in many parts that allows for a solid build while keeping the weight down. Like the rest, it also comes with the peace-of-mind of a 5-year warranty, and, of course, features Cartoni's renowned counterbalance and very smooth, "true" fluid drag. The Focus 22 uses the same patented spring-loaded counterbalance system used in the original Focus head, and features continuous counterbalance adjustment. Also, true to the Cartoni name, the entire head is designed, manufactured, and hand-assembled at the Cartoni factory in Rome, Italy. The 127 parts are machined or cast to micrometric precision and assembled and adjusted to precision by one engineer at a time.

The Focus 22 integrates the Sachtler Touch-and-Go 16 plate system, which is found on Sachtler's FSB and Video series heads. This advantage will allow you the flexibility to efficiently move your camera between compatible heads in a studio setting, and will also future-proof your head for possible such uses in the future.

The new composite material that's used is a sophisticated non-metal that's much stronger than aluminum and yet lighter. It replaces the brass parts in the counterbalance and is also used in the tilt fluid knobs, pan fluid gears, and other parts throughout the body. This composite is also highly resistant to the stress of weight, bending, rubbing, and extreme temperatures, so where it's used in the mechanisms of the head it actually provides for more stress-endurance in addition to saving weight. This composite is the result of a collaboration between Cartoni and the Department of Physics and Engineering at Sapienza University of Rome.

The Focus 22 features a Cartoni-patented labyrinth modular fluid drag system, which consists of individual pan and tilt modules. Each module contains two main sections that have thin concentric rings inside them. The rings in one section interact with the rings in the other with aerospace industry silicon paste fluid between them that provides resistance. The two sections are never fully disengaged from one another, so movement is always smooth and with no play. With there being separate pan and tilt modules, pan drag and tilt drag are accordingly independent, but they work together to allow smooth, uninterrupted motion in any direction. Cartoni performs a laser-assisted, diagonal movement test on every head to ensure that there isn't even the slightest digression from a straight-line movement.

The pan drag control is a large ring in the center of the head that's easy to use even without looking. This and all other controls are designed with ergonomic grips that will feel more secure between your fingers. There's also an illuminated bubble level that will be very helpful in dark settings, and a pan bar is included that can be attached to a rosette adapter on either side of the head. Additional pan bars are available, and sold separately.

The Cartoni L507 is a two stage carbon fiber tripod featuring SmartStop technology. Each leg assures excellent torsional rigidity and no play thanks to the reliable self-adjusting pivot to the 100mm diameter-leveling base. This support offers 16/20mm diameter tubes with a double tube extension on the terminal stage, providing excellent stability and a wider range of height adjustment.

Ideal for Alfa, Beta, and Gamma, this tripod interfaces with the extendible mid-level spreader, the multi-level spreader and all ground spreaders and standard dolly.

This tripod features an carbon fiber construction, double extension design and a 100mm / 4" bowl base.

A maximum height of 57.4" with support limitations of 132 lb are offered on this support.

This Cartoni Mid-Level SDS Smart Spreader fits into Cartoni's SDS tripod legs. The spreader extends by pressing a button to unlock the arms, and collapses just by squeezing the legs closed. The spreader features a bind-free ratcheting mechanism, and it folds neatly within the legs of your tripod. Owing to its dual extendable sections, the spreader allows you to spread your tripod's legs extremely wide while remaining stable, for lower shots than would be possible with a traditional mid-level spreader.

These Cartoni Hooking Rubber Tripod Feet (Set of 3) can be pulled onto most Cartoni tripod models (except for Ultra-Light models) to provide non-slip contact with smooth surfaces. Each foot features a rubber strap (the "hook") that secures it in place on a corresponding nub on the tripod leg.