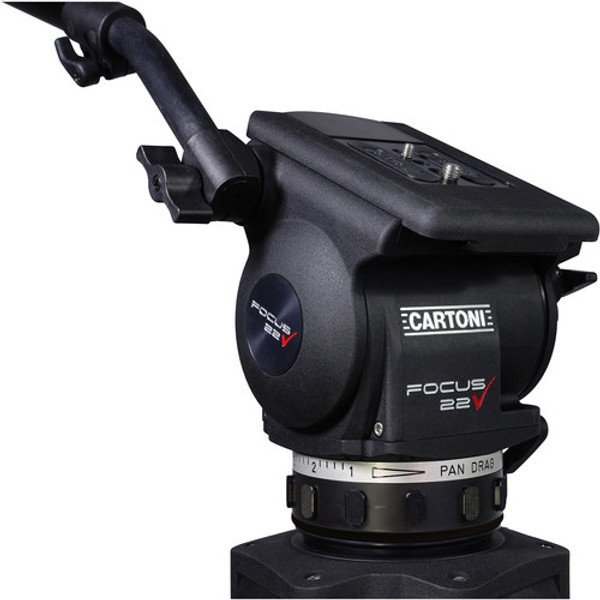 The Cartoni Focus 22 Fluid Head features a 100mm ball base and supports loads between 6.6 to 48.5 lb, with perfect balance along its entire +/-90° tilt range. Relatively lightweight at 8.6 lb, it is intended for users who usually shoot with light loads and therefore need a lightweight head, but who sometimes need to add on a heavy lens or accessory.

The Focus 22 is the largest in a lineup of four video heads that were released as a follow-up to the Cartoni Focus HD head. The complete lineup is an evolution of the original Focus head released in 2005, and a definitive rebranding of 10 years of contribution to the entry- and mid-level user category. Like the others in the lineup, the Focus 22 consists of 127 parts, incorporates a universal plate system, and uses a new composite material in many parts that allows for a solid build while keeping the weight down. Like the rest, it also comes with the peace-of-mind of a 5-year warranty, and, of course, features Cartoni's renowned counterbalance and very smooth, "true" fluid drag. The Focus 22 uses the same patented spring-loaded counterbalance system used in the original Focus head, and features continuous counterbalance adjustment. Also, true to the Cartoni name, the entire head is designed, manufactured, and hand-assembled at the Cartoni factory in Rome, Italy. The 127 parts are machined or cast to micrometric precision and assembled and adjusted to precision by one engineer at a time.

The Focus 22 integrates the Sachtler Touch-and-Go 16 plate system, which is found on Sachtler's FSB and Video series heads. This advantage will allow you the flexibility to efficiently move your camera between compatible heads in a studio setting, and will also future-proof your head for possible such uses in the future.

The new composite material that's used is a sophisticated non-metal that's much stronger than aluminum and yet lighter. It replaces the brass parts in the counterbalance and is also used in the tilt fluid knobs, pan fluid gears, and other parts throughout the body. This composite is also highly resistant to the stress of weight, bending, rubbing, and extreme temperatures, so where it's used in the mechanisms of the head it actually provides for more stress-endurance in addition to saving weight. This composite is the result of a collaboration between Cartoni and the Department of Physics and Engineering at Sapienza University of Rome.

The Focus 22 features a Cartoni-patented labyrinth modular fluid drag system, which consists of individual pan and tilt modules. Each module contains two main sections that have thin concentric rings inside them. The rings in one section interact with the rings in the other with aerospace industry silicon paste fluid between them that provides resistance. The two sections are never fully disengaged from one another, so movement is always smooth and with no play. With there being separate pan and tilt modules, pan drag and tilt drag are accordingly independent, but they work together to allow smooth, uninterrupted motion in any direction. Cartoni performs a laser-assisted, diagonal movement test on every head to ensure that there isn't even the slightest digression from a straight-line movement.

The pan drag control is a large ring in the center of the head that's easy to use even without looking. This and all other controls are designed with ergonomic grips that will feel more secure between your fingers. There's also an illuminated bubble level that will be very helpful in dark settings, and a pan bar is included that can be attached to a rosette adapter on either side of the head. Additional pan bars are available, and sold separately.