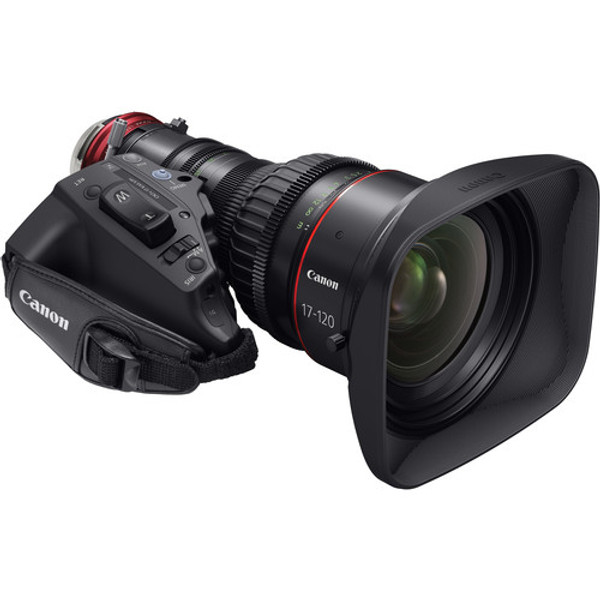 The Cine-Servo 17-120mm T2.95 with PL mount from Canon is designed to combine the functionality and form factor of a broadcast, ENG-style motorized zoom lens with the optical precision of a cinema zoom. The lens is designed for use on cinema cameras with sensors up to Super 35mm (26.2 x 13.8mm) in size and is suitable for 4K acquisition. With a detachable drive mechanism and support for rod attachment, it is designed to be equally at home whether being used by a solo camera operator or a full production team.

With a 17 to 120mm focal length, the lens features 7x zoom and has a maximum aperture of T 2.95 when set to 91mm or wider. Additionally, it features an 11 blade iris to create circular bokeh patterns as well as to reduce refraction. For ENG-style shooters the lens drive features servo motors powering zoom, focus, and iris. The lens can be connected to the camera either using a standard 12-pin connector or will communicate directly through the lens mount when attached to compatible cameras. Three 20-pin connectors below the servo housing allow many Canon and third-party zoom, focus, and iris controllers to be connected.

The CN7x17KAS S features the form factor and control layout of typical ENG lenses, and is designed to be friendly for a single camera operator to control while using the camera shoulder mounted. The zoom servo is controlled by rocker with the right hand and focus and iris can be operated manually with the left hand

The lens is compatible with many 20-pin zoom and focus controllers, allowing the lens to be operated comfortably in a studio tripod or pedestal configuration or remotely, say while mounted on a jib or crane. Compatible controllers include the Canon FPD-400D focus control and the Canon ZSD-300D zoom control

High speed servo-driven zoom and iris is available for critical situations such as while filming sports or fast action. Meanwhile, slower speed settings are available for more expressive work. With this variability, the zoom duration can be set to last anywhere from 0.5 to 300 seconds

The drive unit features a high-performance encoder so that the lens requires no initialization. This means the system can be used immediately without any delay waiting for it to boot up

In addition to servo zoom, focus, and iris another ENG-derived feature is the knurled focus ring, which is limited to a 180° rotation

The lens incorporates the following features designed to make the markings easier to read:

The lens is compatible with a wide array of accessories common in the cine industry, including matte boxes, follow focuses, and electronic and wireless controllers. The focus ring features both a 0.8mm pitch cine standard gear ring as well as a 0.5mm Canon pitch ring, the zoom feature a 0.5mm Canon pitch, and there is also a 0.4mm pitch iris gear

Because of the weight of the lens it is often deemed helpful or necessary to support the lens using a 15mm or 19mm rod system. This lens makes that possible by allowing you to attach a lens support

The lens communicates directly with Cinema EOS camera through the lens interface. This allows lens metadata such as zoom setting and iris to recorded in the camera. Note that a firmware update may be required for proper communications between the lens and the camera.

In addition the lens features a standard 12-pin broadcast camera interface and can also transmit zoom, focus, and iris data to a camera or other device via this connection

The lens features 11 aperture blades to make lens flares and orbs causes by the bokeh effect as close to round as possible. With fewer blades it is often possible to see the geometric shape of the aperture. Additionally, using an odd number of blades helps prevent diffraction effects that can cause pin-points of light to produce an unwanted "staring" effect

Since spherical lenses refract more in the periphery than the center it is essentially impossible for an image to be sharp across the entire frame. Aspherical lenses, on the other hand, are able to maintain much more even focusing across the image area for more uniform focusing. In addition, it means less elements are required in the lens design helping make it not only sharper, but reducing the size and weight as well

Because glass lenses can never be totally free from chromatic aberration Canon applies a special coating, fluorite, which has an anomalous dispersion characteristic effectively reducing the aberration below what is possible with glass alone